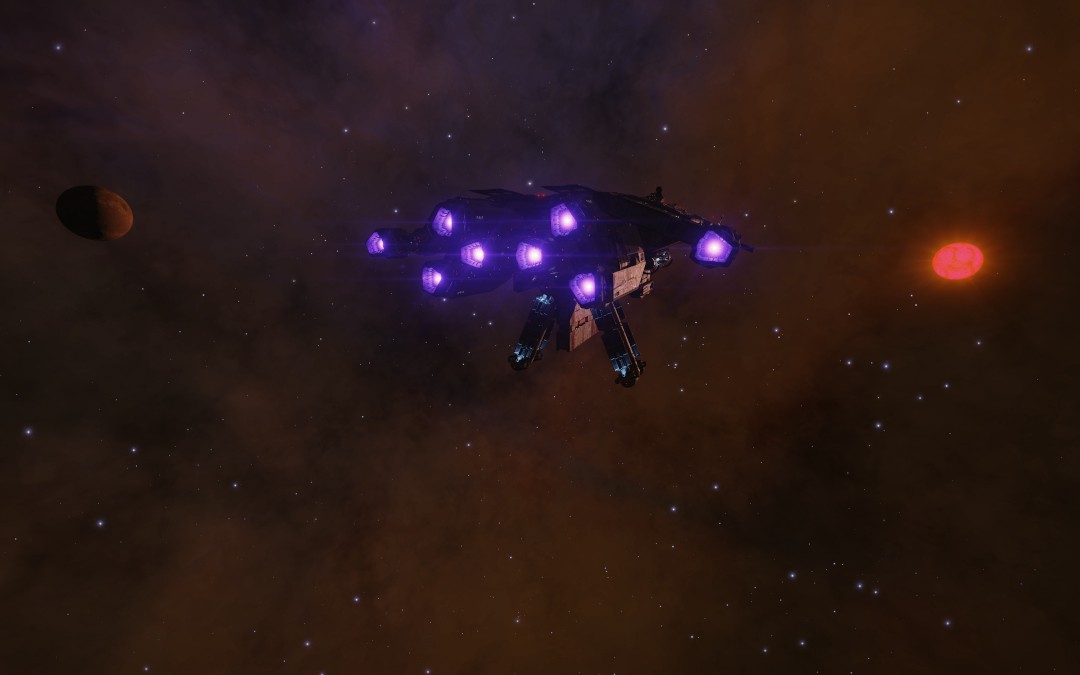 The second week sees the crew gaining confidence in their daily operations, requiring a carefully balanced reassurance in the quality of their work tempered with the seasoned experience of extended periods out in the void, which reminds you even the simplest of mistakes can be life threatening.

We take a moment to celebrate the first of what will be many deployment milestones for this carrier:

This week also saw a change with how carrier jumps are being coordinated.  Due to some pressing time constraints in the run up to departure from the Bubble, the crew had not had the opportunity to acquire the necessary universal cartographic data to precisely plot the in system arrival location for each jump.

To some this level of detail is meaningless.  To other's who have dedicated their lives to the pursuit of exploration, it presents missed opportunities.  Rather than jumping blind into each system, scouting ahead offers the deck officer the opportunity of deterministic navigation.  Each jump may only involve a twenty minute stop in a system, but there is absolutely no reason for this to be a wasted opportunity to observe gas giants, ringed planets or the proximity of two or more stars.  To do anything less cuts into the core principles of exploration.  After all, the visual archive of the deployment operation is not the sole purview of Asp Explorers in front of items of interest.  So scouting ahead for the journey between each waypoint provides the best opportunities to appreciate the wonder of the galaxy while maintaining the cost optimized fewest jumps. maximized jump distance.

The schedule for the week is dedicated to the exploration of the Àrsaidh Nebula which boasts some of the farthest known Guardian Ruins from the Bubble.  A rather opulent use of time considering the distance the carrier is required to traverse to reach it's deployment location, but an opportunity too good for the passing.

Due to some questionable fuel consumption calculations the week offers a timely reminder of the perils of exploring.  While scouring the surface of one of the many biological and geological covered planet surfaces in the Nebula, I am enthralled by the sites beyond the protection of the SRV's cabin to the point where the fuel level alerts might as well have been muted.  It's a costly mistake, that involves the exhilaration of a remlock deployment and a panicked return to the safety of my trusty Krait Phantom.

Returning to the carrier I'm looking forward to getting some rest after spending much of the day with dirt beneath me.  While lamenting the loss of a long serving SRV I realize the implications of a decision made prior to departure from Brewer Corporation's carrier construction facility.  Without an outfitting module aboard the carrier I am unable to replace the destroyed SRV, while at the same time the oversight of not having spare planetary vehicle hanger modules stored aboard the carrier dawns on me.

Fortunately this deployment is still in it's early stages and can afford to incur the minor inconvenience of a shopping trip to the nearest appropriately stocked starport.  In this case it's a course of 40 FSD damaging, hyper-focused Neutron star boosted ship jumps to the Eudaemon Anchorage station in the Rohini system, some 11 Klys away.

On the off chance that life at the edge of the galaxy accelerates my occasions of impaired judgement, I purchase eight 2G and four 4H class planetary vehicle hangers for the different ships aboard the carrier.  Taking a similar boosted route I set course for return to the carrier, where a simple module transfer transaction is conducted with estimated delivery in under 17 hours.  The cost in credits is trivial considering the running expense of the carrier.  It is purely the inconvenience of time and the slight tarnish to a professional reputation.

Becoming a totally self sufficient carrier is an expensive proposition, and the experience reminds me of why those carrier service outfitting decisions were made in the Brewer showroom.  The running costs alone for outfitting are 5,000,000 credits/week (1,500,000 suspended) compared to a total purchase and transfer cost of those planetary vehicle hanger modules of 697,426 credits (14% active / 46% suspended outfitting module running costs for just one week).  Similarly the running costs for the redemption office services are exorbitant compared to the income derived from claiming codex discoveries (granted the redemption office handles more than just codex transactions, but this cost comparison is being conducted purely within the scope of exploration).

All of those unplanned excursions have taken some time away from the planned planetary surface investigations, and before too long it is time to return to the carrier once more to begin the jump calculations to waypoint three.

What passengers aboard the carrier have been saying this week.

aboard DSSA Chrysaetos Refuge while shes stopped over in Prai Hypoo GF-E c10 visiting some ruins. Figure I'll pop on down to the corner store Sacaqawea Space Port over in Skaudai CH-B d14-34. Grab some milk. #EliteDangerous

Heading out during our first stop with the DSSA Chrysaetos Refuge pic.twitter.com/V5mePz1gc1

made it out to Sacaqawea Space Port with little trouble. Dumped cargo and now time for a quick 4,575.23LY turnaround back to the carrier! pic.twitter.com/F8dxLsEf3S

Managed to get a quick ~8,000LY round trip in with @BenCmdr and map some Earth-like worlds. Always wanted my own planet 😎 pic.twitter.com/XRpm80AHzZ

A few pictures from the first week of our deployment aboard the @fc_dssa21 pic.twitter.com/cDbr5sos3y

About the author: Bow Lof Petunias

Bow Lof Petunias is a player character in the galaxy of Elite Dangerous, specializing in long range exploration, cartography & prospecting. When he's not aboard his Fleet Carrier, the "DSSA Chrysaetos Refuge", or piloting one of his many ships, this commander is a bit of a random scribe, a confirmed screenshot junkie and occasional video creator. 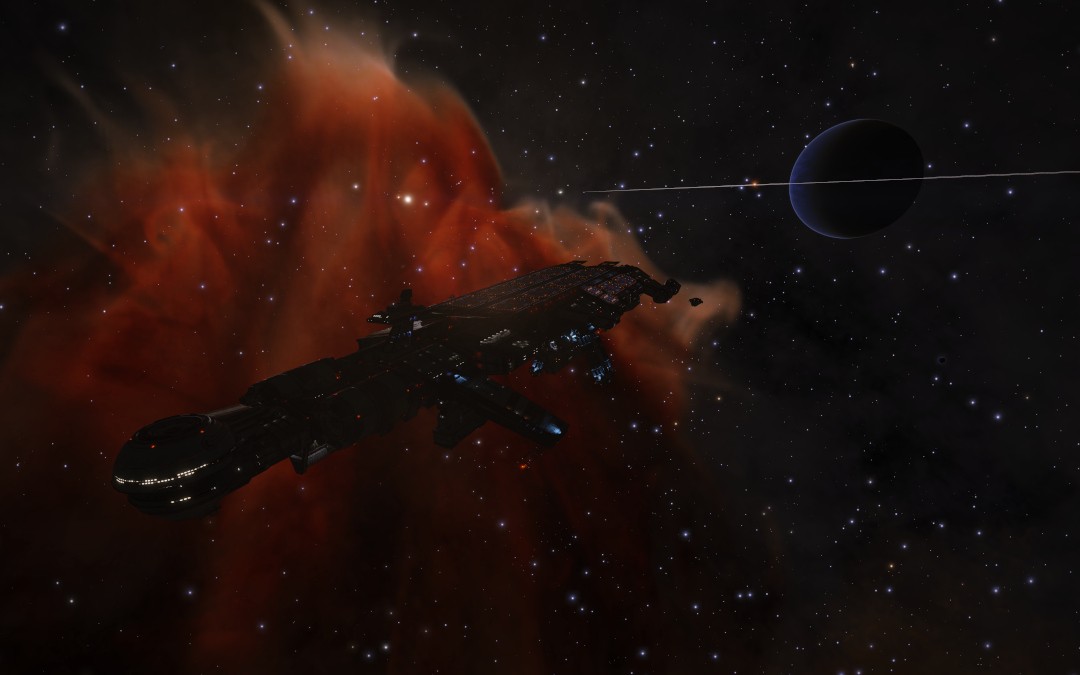 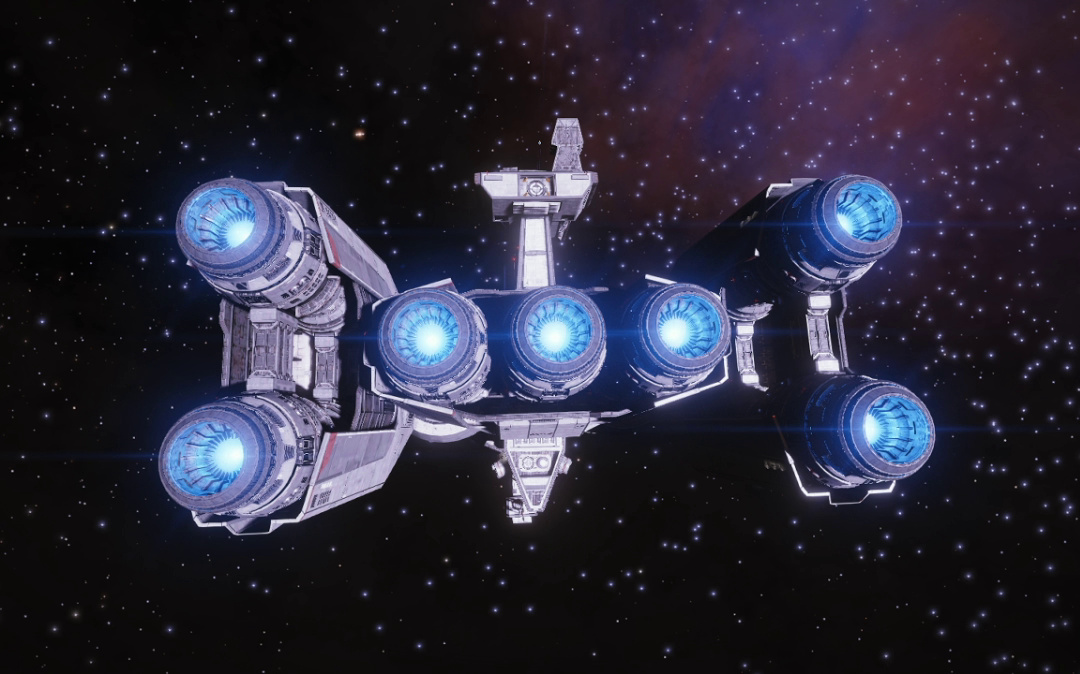